So, while the auditions themselves were fabulous, the day started out as a nightmare... or a comedy, depending on perspective.

It started at 6am, it was cold, damp, dark.... shit, the power's off! No furnace to take the damp and chill off. Also no, shower, no brushing teeth, no flushing toilets, and OMG.... no coffee!!

"NO problem", says the director (who's staying in my guestroom. "We'll just leave early and stop at Tim Hortons on the way into town"! (Did I mention award nominated director? I really want him to be impressed with me and my professionalism.)

So, we head out into the pouring rain to race to Timmies. The local one has big bathrooms, we can wash our faces and brush our teeth! But the overnight rain has made the director's car sink ankle deep into the muddy yard. We're stuck.

No problem, there's three of us, two to push, one to steer. But no go. No move. Lots of mud on my leather trenchcoat, hands, and glasses though.

Called CAA. Wait for an hour, so much for leavng early and stopping at Timmies. Now we're calling people to tell them we'll be late, please wait for us. Standing outside the locked office, in the way, in the rain.... Should make for very happy to see us actors!

Tow truck arrives.... except, it's not a tow truck. It's a great huge flat-bed truck, trying to back into my driveway beside 2 cars (one stuck, one without keys) and a truck (also no keys at the house).

So, the truck backs onto the yard to reach the stuck car. The truck is much heavier than the car and... (can you see t coming?)... gets stuck in the mud. 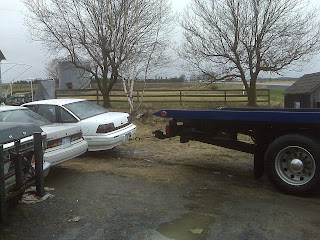 So, we were lucky that the truck cab wasn't on the grass and was able to pull the back end out of the mud. But to do that, he had to move the truck so that it was directly crossing the street, blocking traffic in both directions.

This was unsafe, so he turned and backed up, and moved forward until he had most of the truck parked along the verge and the hind end in the driveway. Two problems, 1) the chain is too short to reach the car, and 2) he took out my mailbox! My poor battered and bruised mailbox is now firmly stuck under the truck, with its cement filled (200lb) milk jug wedged between the front and back wheels. 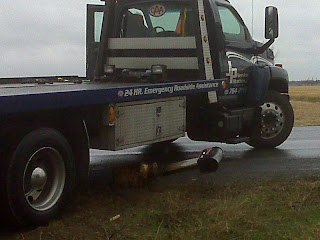 So, we drag it out, find extra chain to attach to the tow truck and eventually drag the car out to the nice, firm, hard-packed driveway. Without holding up too many cars as the truck is now at 90 degrees to the road. Again.

But everything was eventually cleared up and we were on our way, only an hour late, still no faces washed or teeth brushed or time to stop for coffee!

But fortunately, there was a coffee pot at the office, and eager actors to run and buy us breakfast while we made ourselves human in the office washrooms.

We also got caught up quite quickly, and saw some amazing auditions. So, all's well that ends well. Right? 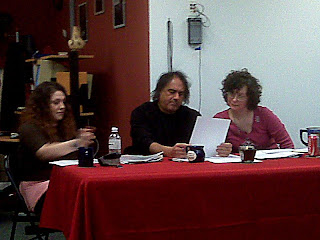