Well, I was reallyreally busy the last 2 weeks! We held auditions for Me, my Mom & a Whistle on the 20th and 21st. SEVENTY people showed up, making for two 15 hour days! I was astonished by how amazing some of the actors were. Non-union, practically unknown, and just freaking brilliant. This will lead to some very hard decisions!

Then I had to prepare and submit two applications for funding to make music videos by the 23rd. I'm producing music videos for two local bands "naked i" and "Mo Sayk", as a way of raising seed money for the film.
I'm also looking for 3-4 bands for the June 11th deadline, as we'd like to do as many as possible before we start principal photography on the film.

We are now about four months away and I NEED to get funding happening! I'm doing up a budget based on deferrels, but that'll entail a whole new repayment schedule. A woman's work is never done. Anybody have any money they don't need? Any at all? Anyone need a business loss for tax purposes? You can carry forward prior year earnings to cover it and lower your previous taxes. (at least I think you can. you used to be able to)

Then there's this week's deadline. Tomorrow I have a development application for CJOH to get a little money to write my next film. Or one of my next films.

Friday is also the deadline to notify the NFB that you intend to propose a project for the Aboriginal Film Development somethingorother. So I'm working on a film idea for that. It's real deadline is May 12th. Plenty of time! At least, these days it seems like plenty of time. LOL
Posted by Laurie at 6:36 AM No comments:

Getting ready for auditions and meetings

Well, the auditions are in a week, and things are getting busy. 70 actors, meetings with the DOP, a band or three, the photographer, a couple of potential investors.... and that's just monday and tuesday!!

You can buy me a scotch now.
Posted by Laurie at 9:17 AM No comments: 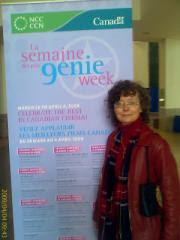 Me, at the Genie sign before the "meet the nominees" luncheon.
Posted by Laurie at 9:18 AM No comments: 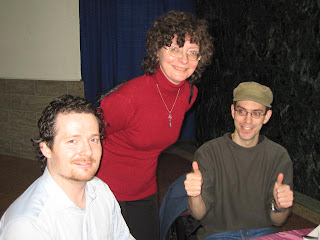 Here I am at the Genie Brunch with Jason Daley(left) entrepreneur, marketing guy and film-maker! Talk about handy to know!

I also got to meet several people who are into local indie film production and even a couple of Genie Nominees. When you add in the french toast with crushed strawberries, bacon and fresh, hot croissants... $30 well spent, I think!
Posted by Laurie at 7:37 AM No comments:

Paul Gross' Passchendaele wins six awards! Ce qu'il faut pour vivre/The Necessities of Life win four!
Kristen Booth wins best supporting actress for Young People F**king. I loved her acceptance speech! "I'm so fucking excited!" Then she pointed out that this was the only comedy winning an award at the Genies in years, and Canada doesn't have to be dark and depressing to be good.

Wendy Crewson presented both best actor & best actress, and used her moment in the spotlight to critisize Harper's cuts and to invite people to make their voices heard. She also joked about having an "after-party on the lawn of the PM's residence, she'd be the one standing on the overturned car, Sarah Polley would be handing out protest signs by the burning barrel." LOL

But Kristen's win gave me hope for my film. Traditionally, comedies are NOT well represented at awards functions, as they're not "serious" film. But her best supporting actress award (even if the clip they showed was a serious one, not a funny one) shows that comedies can be "serious business".
Posted by Laurie at 3:47 PM No comments:

The Genies are in Ottawa this weekend!! So, though I refuse to wear my harem pants, I'm off to a party tonight, brunch tomorrow with several nominees, and then of course, the Genies on TV!
Posted by Laurie at 7:53 AM No comments:

Music and actorsand budgets, oh my!!

So, I have 60 slots for auditions, more or less, and 25 call-backs, leaving +/- 35 new faces.
So why do I only have 6 slots filled? Because no-one's getting back to me about the time they want to come in! Come-on guys, get with it, 2 twelve hour days are enough, I'm not auditioning forever!

On the other hand, listening to multitudinous songs for the soundtrack is kinda nice. I'll be forwarding the best on to the director, so if you're good, send me a MP3.

The less said about budgets the better!
Posted by Laurie at 9:55 AM No comments: