You can actively support local Film-makers

Now it's easy to get involved in supporting local film-makers!

Thanks to Jith Paul, we have a quick link to donate to the film Me, my Mom, and a Whistle.
http://mmw.jithpauldesign.com/ 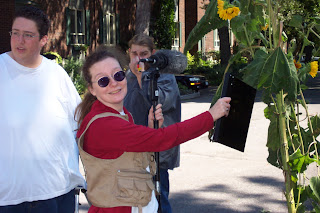 Now that emerging artists and small independents are competing for the same dwindling pool of government funding monies as Atom Egoyen, Norman Jewison, and David Cronenberg, we've decided to OPT OUT of the traditional funding model.

We're looking for cash donations from people who believe in independent film. While we're hoping to get $20+ per person, we'll take whatever you can find in your couch cushions! I figured that if everyone on the friends lists of the cast & crew donated $20 each, we could make this film, AND PAY EVERYBODY!

If we get enough, we'll reward thhe people who were so kind and supportive with a party & a screening!
Posted by Laurie at 6:10 AM